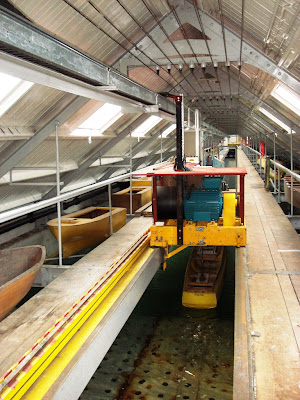 The hull designs for ships like Aspatria would have been proven prior to building in testing tanks like this one.

This tank is 92 metres long, 6.7 metres wide and 2.5 metres deep. Scale models of the hull design were made from wax, a skilled trade in itself and these were then attached below the cradle shown above and pulled along the length of the tank, with simulated waves generated at the far end. The models could be up to 6m in length and you can see examples of sections of them on the left hand side of the photograph.

These tanks allowed naval architects and designers to test their hull designs to calculate efficiency and stability. Fuel consumption and speed could be calculated in an era long before the advent of computers and CAD/CAM.

This particular example was built in 1892 and is located on the River Clyde, a big shipbuilding area in the 20th century. It still remains in working condition and has been used for training and education purposes until recently. The last vessels it was used to design were some modern RO-RO (Roll On-Roll Off) ferries.