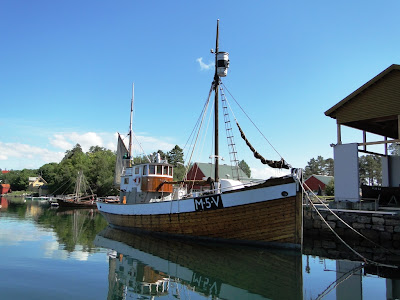 The Mallory series of books are set towards the opening stages of the Second World War.

German forces occupied Norway in 1940 and this resulted in many refugees fleeing west to Shetland.

A secret base was set up at Lunna on Shetland and during the winter the same fishing cutters that brought the refugees, took agents, wireless sets and arms to Norway to support the resistance.

At one point, losses were so great that they nearly gave up. It was only through sheer determination that the Shetland Bus continued.

The operation was of great psychological importance to the Norwegian people and at the end of the war, there were 60 illegal radio stations transmitting from Norway, most of which had been put there by the Bus.

Strategically, the Germans were forced to use lots of men and resources to defend the western coast of Norway. The SB missions were one of the reasons that the Germans thought the allied invasion would come via Norway rather than Normandy and they even set up a chain of gun fortresses to protect it.

The Norwegian people have never forgotten the bravery of those involved with the Bus and there is a memorial in Alesund Harbour to them. 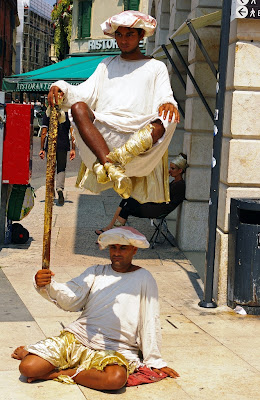 The Gully Gully Man was a magician that would visit ships, mainly in places like Egypt. He would perform coin, rope and card tricks and his speed and finesse at sleight of hand would normally leave sailors puzzled and poorer.

Do you know how the man on the bottom supports his colleague one handed ??
Posted by Unknown at 00:45 No comments: 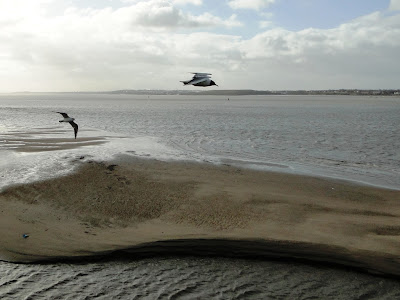 Are you feeling low or flat at this time of year?

People keep asking me why I don't publish The Pull of The Tide as a free Kindle book.

There is a saying 'there is no such thing as a free lunch', but what I have done is to change the price of the book.

So, in the run up to Christmas, I have reduced the book price which is now on the Amazon Kindle website for just £1.53 !

For those of you in other parts of the world, the price has also been reduced on Amazon.com in the same way.

Hopefully, now you can stop feeling flat and soar like a bird - enjoy.
Posted by Unknown at 00:33 No comments:

The ships carpenter was an important man on the old wooden sailing ships. The wooden hull was the only thing between the men and the sea and it had a tendency to rot, split and leak with age.
However, even steel ships like Aspatria carried a carpenter. Traditionally known as the 'Chippy' or 'Chips', the real name of the carpenter on  Aspatria was Archie Woods and so the crew gave him the nickname 'Woody'.

Archie's tasks included oiling and greasing the steering gear (which linked the wheel on the bridge with the rudder down aft), sounding all the tanks and bilges, checking how much freshwater had been used, greasing the winches and routinely repairing hatches, lockers and doors. 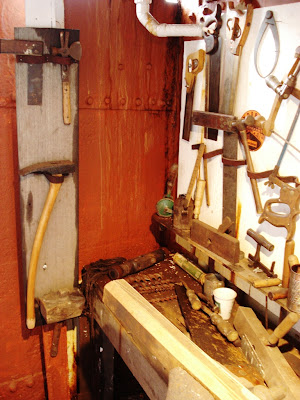 'Woody' had a little workshop up in the forecastle (bow) of the ship, which is shown above. He would normally be seen doing his daily rounds, walking about the deck with his sounding rod in hand and being followed by his cat 'Mrs Chips'. How that partnership came to be is another story.

I have received my first review from Japan:

'Firstly, I want to say thanks for introducing me to this book.
I was read this book on a commuter train every morning and evening,
and I had became a member of the sailors of the M/V. ASPATRIA.
Sometime, I forgot to get off my station, because my body was being on-board.

I had found in this novel that there are the oldest European Chinatown communities
in Liverpool and found good name bar "Anchor" , this name seems to be port of town, tobacco smoke and ship s whistle, I had felt in the background in the bar'.
Posted by Unknown at 00:36 No comments: 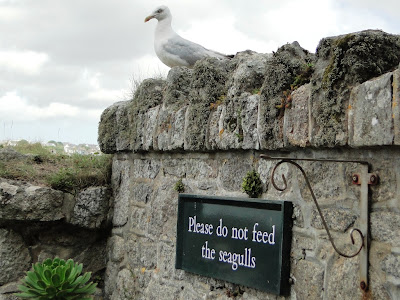 Have you read the first book and want more in-depth information about Aspatria, the members of her crew and other characters ?

Are you considering downloading the book from Amazon Kindle ??

Tired of having to keep checking back here to see if the blog has been updated yet ?

Don't just wait around for the next juicy morsel, use our new e-mail notification at the bottom of the page. Simply enter your e-mail address and Feedburner will e-mail you when there is a new post here. Don't worry - no e-mail addresses are visible to the author.

Once you submit your e-mail address, Feedburner will automatically e-mail you to verify everything and after that, you won't have to wait around again. 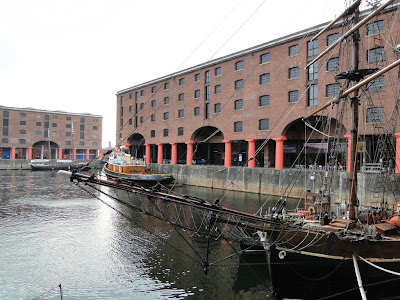 Liverpool was a great inspiration when it came to me writing my first book. This is probably one of the few ports in the UK which acknowledges its long maritime history and I've spent hours here.

It's not that difficult to imagine Captain Neil Mallory and his crew of nautical misfits in the docks. Liverpool has been a prosperous and wicked city in its time. The successful merchants quickly moved over to the other side of the river and the Liverpool waterfront became a place of pubs, chandlers, maritime trades supplying the ships and the more nefarious trades supplying those who drove the ships.

I own a reference book called 'The Streets of Liverpool - A Photographic Record' by Colin Wilkinson which contains many black and white photographs of the city throughout the 20th century.
It shows pictures of the slums of Johnson Street and Burlington Street in the late thirties. There are hoardings in the background for Cherry Blossom boot polish, Camp Coffee and the latest Gloria Swanson film.

What better place to provide a home port for the good ship 'Aspatria' even if she can probably never return there now !!
Posted by Unknown at 00:19 No comments: 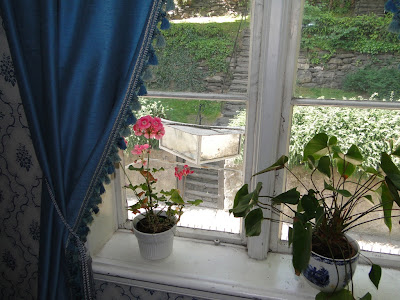 Well the book has been out for nearly a week and sales are going well. I've even sold a copy in Japan through the Amazon Japan website which is great.

Mallory, his vessel Aspatria and his misfit crew have been going through my head for four years and it feels good to finally get them down on paper and out there. It's strange but when you live with characters for so long, they really become like flesh and blood people.

People keep asking me do you really know people like that and I answer with the same answer as I've written in my authors biography spot on Amazon:

'When I wanted to go to sea, my teachers at the nautical college filled my head with stories of runs ashore and jolly japes. At 16, this largely fuelled my enthusiasm for a career in the British Merchant Navy. At college, the closest we got to any of this was nearly hanging a very irritating student off a rotating radar scanner one day and electrocuting ourselves to varying degrees on a regular basis.

When I finally got to join ships three years later, it was the 1980's and things were already changing. Of course when they told their stories, my teachers had been thinking about when they had gone to sea thirty years earlier. This hadn't really dawned on me at the time. Can I sue for a mis-sold career ?

Now thirty years later, I've seen a lot of places and met a lot of interesting people and I still work with the sea - in fact, I can hear it now, gently lapping on to the beach as I type. Many of the characters I've known are dead, alcoholic or run greengrocers shops, but they will always live on in my books'.

People that know me and have read the first book are now asking me when the sequel will be ready. They seem quite disappointed when I explain that I cannot just produce another 150 pages next week. I guess we live in the video age - an age of instant gratification, but I am starting work on a sequel to 'The Pull of the Tide'. There are a lot of people and experiences that I just could not fit in the first book, so I still have some stories left to tell.

By the way, following the theme of adventure and intrigue in the book, the photograph above shows a prismatic mirror which resides in a shipowners office used around the 1930's when the book is set. The mirror allowed the shipowner to see who was walking up and down the street outside without peering out of the window. Who he was looking for, I have no idea....perhaps he was watching for one of the shady characters that Mallory encounters ?
Posted by Unknown at 00:16 No comments: 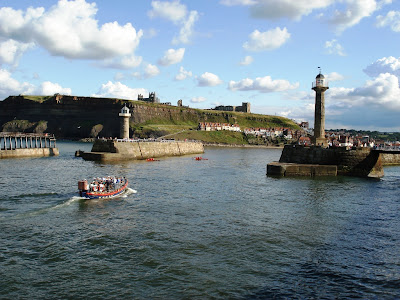 This was where the idea for the Mallory books started - in Yorkshire in 2008.

On a lazy holiday, with the trials and tribulations of the daily grind temporarily suspended and my imagination free to wander.

I imagined an old ship tramping around the worlds ports trying to earn a crust. A captain with good and solid intentions, coping with the aftermath of the depression and a bunch of misfits as a crew.

What started off as a serious book became a humourous look at life at sea, peppered with my own experiences and anecdotes.
Posted by Unknown at 00:10 1 comment: 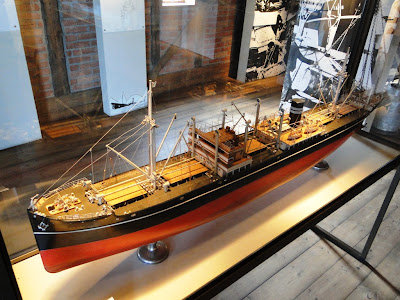 Aspatria, the ship that is the undisputed star of the 'The Pull of The Tide' is a 4000 ton general cargo motorship not unlike the ship illustrated above.

In the book it states she was built on the Wear in Sunderland in 1924 and was fitted with a 3-cylinder Doxford-Junkers engine which ran on oil instead of steam.
Posted by Unknown at 00:15 No comments: