Barged Out of the Way 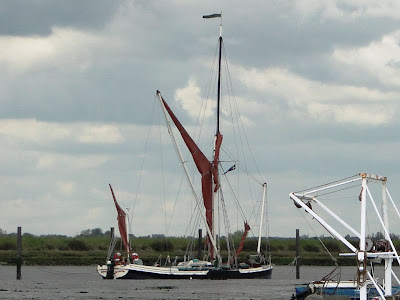 The new book is coming along and should be available to download on Kindle sometime in late March.

Unfortunately, I am currently being sidetracked and reading an excellent Kindle book called 'A Floating Home' by J.B.Atkins and Cyril Ionides. It is unusual in that it was written in 1916 and describes a family who were struggling to afford both housing and private schooling for their children. They hit upon the idea of buying a working Thames sailing barge and converting it to a home. Although not unusual these days, during the Great War, it would have been a head-turning event.

The author talks about 'Water-sense'. He said 'In many people the sight of water responds to some fundamental need of the mind - when they are away from water they are vaguely uncomfortable, perhaps feeling that the road of freedom and escape is cut off'.

I think most of us who have lived, worked or played on the water can empathise with this. Certainly here in the UK, where you are never far from water, whether it is a lake, canal, river or the coast. I get very ratty if I don't see an expanse of water every few days or so and have always put it down to the fact that the average human is about 60% water and there is some psychological need.

For those of you not acquainted with these beautiful boats, they were designed to carry cargo around the shallow and broken east coast of England. They are shallow draft, can be handled by two crew, often husband and wife and luckily, there are still a few of them around.

If you are interested in learning more about these barges, this is a good link:
Sailing Barges
Posted by Unknown at 02:55 No comments: