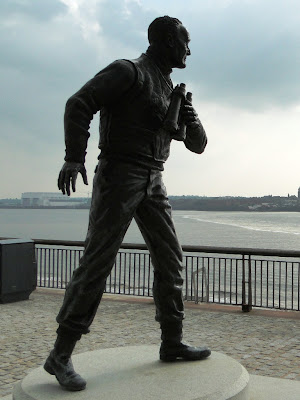 Following on from Post#12 (X Ray Specs), this is the first ex-ray expose on the characters in the Mallory series of books.

"Geordie" Paterson is the first character we meet in the 'Pull of The Tide', the first book. Known as the 'Walking Catastrophe', Paterson is a deckhand on 'Aspatria' and it has been said that he could make trouble marooned on a desert island.

Hailing from Sunderland, Ordinary Seaman Paterson is described as wearing a gap-toothed smile and a flat cap the size of a dinner plate. Dubbed "Geordie" by his shipmates, he always maintains that the nickname is a deliberate insult as he isn't from Newcastle. Few of the crew know the difference.

Uncouth and ignorant, Paterson shares a cabin with a Capuchin monkey called Neville. "Geordie" rescued the monkey from South America when he saw 'Neville' imprisoned in a wooden cage by Amazonian natives. Afraid that they would eat the primate, he bought him in exchange for a Sunderland football scarf and rattle. It was said by a wag in the crew that his cabin got a lot tidier when 'Neville' moved in.

"Geordie" appears regularly in both 'The Pull of The Tide' and the new sequel 'The Surge of The Sea'.